Anxiety and excitement - those are the two words I would use to describe getting ready for studying abroad. Of course, I was excited to travel and study in a new country and learn a new culture, but I was also terrified. This was the first time I had ever left the U.S., and I was alone.

Two weeks before I was due to leave, my bags were completely packed and ready to go. All I needed was my phone, laptop and chargers. A week before I left, I bought a Polaroid camera and film to take with me. How cute would Polaroids of my trip be? 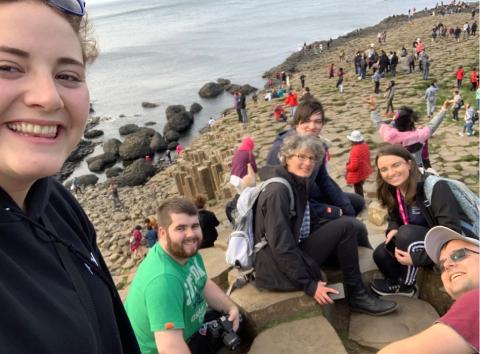 September 14th came quicker than I thought. Ironically, that is my brother’s birthday, so we had a going away/birthday party that afternoon. The drive to the airport that night was absolutely the worst. I gripped my seat belt so tight that my fingers went numb. My little brother teased me the whole drive, but I didn’t care. My nerves were shot. What if I got lost or my flight got delayed? What if I missed my layover or my shuttle? I purposely booked a late flight so I would sleep and wake up "in the morning" upon arrival. That didn’t work. I didn’t sleep at all on my flight to London, but my flight to Belfast, I got an hour. By the time I go to my accommodation, Coppin House, it was 7 p.m. here, 2 p.m. EST.

The RA, Ryan, showed me to my room. I had MY OWN ROOM! Love that, so going to miss that. I unpacked my clothes and showered before adventuring to the third floor where most students were hanging out. That’s where I met Chloe and Ben. The three of us quickly jumped into the differences in the education systems between Northern Ireland and the U.S. I can’t believe that was twelve weeks ago.

My first week here was strange. It was induction week for all the first years and us internationals. However, the international students had our own induction, so we didn’t meet our fellow classmates until classes started the following week.

Coppin House bonded a lot the first few weeks. We all wanted to meet those we didn’t know and make new friends. Anytime anyone planned to go out, they would message our house group chat and invite whoever was interested. That’s how I met Conal and Leo and most of the people I’ve befriended. My absolute best friends here are Jordan, Conal, Una, and Anna. Jordan was another one of the first people I became friends with. He and I were in the same drama modules and he lived two floors below me. Una is also in drama, but she’s a second year. We met through mutual friends, Alexandra and Cara, but we bonded over drama and formed our own friendship. She went on a trip to New Orleans for two weeks while I was here. Anna is from Germany. She studied Irish Studies while at Ulster. We bonded during induction week and it all fell into place from there. She lived on my floor, so we had quite a bit of dinners together. 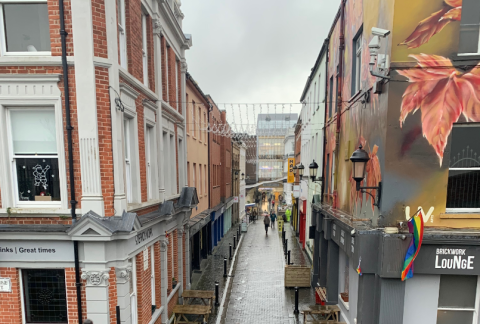 My classes were interesting to say the least. Instead of classes, they’re called modules. The two drama modules I enrolled in were 100% coursework based. On Monday, I had acting with Rachel from 10:15 to 1PM. We studied a bit of Stanislavsky and Checkov techniques, but not at desks and taking notes. We performed exercises and applied the techniques to short scenes we rehearsed for class. Week One all of my course (degree) attended class from 10:15 a.m. to 1 p.m. There were about 27 of us, so we split into two groups for the rest of the semester. In those groups, we had partners and we had to learn a scene for an "audition" for the second years in the directing module. We performed the scene Week Four and by Week Six, we had our groups for our final assessments. Week Seven was a reading week, meaning we had the week off. Week Eight we began rehearsals. I had to act in two scenes and stage manage another. Right now, it’s Week Twelve, so I haven’t performed my assessment yet, but fingers crossed it goes well.

My other drama module is Performance Technologies. We met Wednesday’s from 9:15 to 10 a.m. for lecture with Lisa and 11:15 a.m. to 1 p.m. for the practical class with Adrian. In this module, we studied all aspects of stage managing and what comes with being in that role. This was my favorite module of all three I took. We learned about how to plan rehearsals, how to make ground plans and lighting plans for a performance, what to keep track of and how (props, costumes, set design, rehearsal reports, etc). I loved playing with the lights and sound board. It felt like I was back at Waynesburg in our theatre.

My third module was a music module, Music Technology: Desktop Audio Production, which met Friday’s from 10:15 to 11 a.m. In this module, we learned about different audio platforms such as Audacity and Logic Pro. We had a group project early on that required us to record random sounds and produce a one-minute piece of music from what we recorded and then present it to our lecturer. Our final, again, is not an exam, but our own two-minute piece of music. We could reuse the sounds we’d already recorded but remaster them enough that they sound different.

This last week has been something else. I remember first getting here and being excited. Then time started to go by, and then it was my birthday. Then Halloween passed. That itself was an experience. Derry is the number two place in the world to celebrate Halloween. It’s a week-long event with at least three days to dress up and celebrate. Some of my fellow drama students performed in the streets. Jordan wrote a show that was performed in the windows of a shop. Una performed with the Musical Theatre Society in an Adam’s Family-esque show outside of Nando’s. The streets were shut down in the center of town. A food market was set up outside the walls that surround the city. People could walk the walls and see everything that was going on. There was a crane set up in the Diamond Square and acrobats were strapped to the hook and lifted in the air. They performed eloquently as the crane moved them around the square. There were parades and fireworks. Halloween is a HUGE deal in Derry.

Next thing I knew, it was Thanksgiving. Charissa, a fellow American, and I organized a Thanksgiving Dinner for our floor. We had turkey, green bean casserole, mashed potatoes, sweet mashed potatoes, corn bread, homemade cranberry sauce, broccoli and cheese, bread rolls, pie and gingerbread cookies. It was such a good dinner and we were excited to spend that time together as a floor. Out of the 16 people on our floor, 12 showed up and partook. I think that was the last family dinner we’ll have together. Typically, our floor does a big potluck dinner every few weeks. Everyone makes a dish and brings it to dinner to share. The rest of Coppin would be jealous, but my floor is close. All the international students in the building are on the fourth floor.

There was only one point in time where I hated my floor. Week Two of classes, so my third week here, the elevator broke and stayed that way for a week. Once it was fixed, it lasted three days before breaking again. Maintenance was quick to fix it again. Luckily, it has not broken down again. Knock on wood, I’ve got a week left here. Crazy! How is it already December?

This week has been a bit hectic. Week Eleven just finished. My groups performed this past Friday and got feedback for what to improve for this Friday. One of my friends left for Disney in Paris. Two other friends had a rough week. But now, we’re onto Week Twelve. My last week. This is the last Sunday I’ll have in this room the way that it is. Next Sunday will be spent packing what’s left of my belongings. As of right now, I’ve packed half of my clothes, my books and some other odds and ends I know I won’t use before leaving.

The University of Ulster, Magee Campus in County Derry, Northern Ireland has left a major impact on me. I am so thankful for the experience and the education I received here. I have loved every second of being here and exploring. What’s App will be my savior when I’m home, so I can stay in touch with my friends here. I’m really going to miss everyone in my course, in Coppin House and the rest of the internationals. To be honest, I’m already planning a trip back out here for October 2020. What better way to celebrate my birthday than to visit Derry again?

This experience has opened my eyes so much. I know people always find themselves while in university, and I did, but I’ve discovered even more about myself in this exchange program. I like who I am and who I’ve become. I look forward to coming home and seeing my friends and family again though. This truly has been the most amazing experience I could ask for.