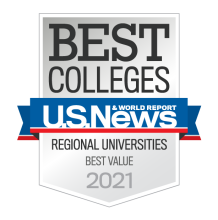 Waynesburg University continues to be a top value school, ranked among the top five best deals of both private and public universities in the Northeast.

Waynesburg University continues to be a Best Value School, ranked among the top five best deals of both private and public universities in the northern United States by U.S. News & World Report.

Waynesburg University has been named to Money Magazine’s 2020 “Best Colleges For Your Money” list. Waynesburg was one of 70 schools across the state of Pennsylvania to qualify and was fifth among public and private institutions of all sizes in southwestern Pennsylvania.

In The Economist's first-ever college rankings, which measured 1,275 colleges and universities based on how much graduates actually earn versus their projected earnings, Waynesburg ranked in the top 100 nationwide.

The Brookings Institution scored universities based on the value they added to student outcomes irrespective of student characteristics, based on the earnings of alumni. Waynesburg ranked higher than 92% of the 1,666 four-year colleges analyzed.

Why are they talking about our value?

Our student loan default rate of 4.6% is much lower than the national average of 9.7%.

Tuition, room and board at Waynesburg is more than $11,000 below the national average for private, non-profit, four-year colleges.

More than 90% of Waynesburg students receive some form of financial aid each year.

What else is noteworthy?

Our commitment to service

Waynesburg University was recently named one of “The 50 Most Beautiful Christian College and University Campuses in the World” by Christian Universities Online. Ranked at No. 22, the University was one of three Pennsylvania institutions recognized. The schools recognized not only provide a high-quality education and thorough devotion to Christian principles, but are also aesthetically pleasing, “boasting some of the loveliest looking campuses anywhere on Earth,” according to the Christian Universities Online website.

How do our programs rank?

Many of our top majors have been recognized for academic excellence and value throughout the region and nationwide.

RegisteredNursing.org ranked Waynesburg University’s baccalaureate Nursing Program No. 2 in the state of Pennsylvania for the third consecutive year. Waynesburg received a score of 98.66 out of a possible 100, which was an increase over the previous year’s score of 97.97. Programs were evaluated on several factors, including how well a program supports students toward licensure and beyond, as well as current and historical pass rates on the National Council Licensing Examination for Registered Nurses (NCLEX-RN).

Waynesburg University was recently named a top nursing school nationwide in the inaugural ranking by Nursing Schools Almanac. Waynesburg ranked among the top 1.5% of the more than 3,200 schools that were considered. Ten percent of those schools made the final list, with Waynesburg being ranked No. 49 in the nation.

Top 2% FOR value in nation

The Nursing Program was recognized nationally as a “Best Value" by College Factual, ranked at No. 7 out of the 500 school nursing programs ranked. The Program is ranked No. 2 in the state of Pennsylvania. College Factual ranks schools for best value by estimating the actual average cost for an undergraduate degree, using the quality results from the best colleges ranking and personalized factors, such as location, cost and financial aid.

ONLINE RN to BSN Program No. 2 in Pennsylvania

Waynesburg University’s RN to BSN Program was recently recognized as a “Top Ranked Online RN to BSN Program” in the state of Pennsylvania by RegisteredNursing.org, being ranked No. 2. Programs were analyzed and ranked according to the following criteria: program accreditation, online offerings, number and variety of nursing programs, ratio of total nursing program completions versus total program completions, annual tuition, ratio of tenured faculty, and university/college acceptance and graduation rates.

Waynesburg University’s Nursing Program was recently recognized online as a Top 50 RN to BSN Program by RNtoBSNOnlineProgram.com. Waynesburg ranked No. 18 on the list, which measured schools according to tuition and graduation rate data from the CNN Money College Cost Calculator and the Integrated Postsecondary Education Data System, as well as accreditation information provided by each school’s website.

Explore the Department of Nursing

Waynesburg University's Criminal Justice Administration Program was recognized nationally as a “Best Value" by College Factual, ranked at No. 7 out of the 387 school programs ranked. College Factual ranks schools for best value by estimating the actual average cost for an undergraduate degree, using the quality results from the best colleges ranking and personalized factors, such as location, cost and financial aid.

The Criminal Justice Administration Program was also recognized for value by College Factual by being ranked No. 2 in Pennsylvania in the 2020 "Best Colleges Nationwide" rankings.

Waynesburg's Master of Arts in Criminal Investigation (MACI) Program was recognized as a “Best Online Masters” Crime Scene Investigation Program, ranking in the top five of all similar programs in the nation. The Program was also awarded the distinction of “Most Customizable."

Waynesburg University's Department of Communication was nationally recognized as a best value in the 2020 College Factual "Best Colleges Nationwide" rankings. The University was placed in the top 2% nationwide for communication and journalism and No. 3 in Pennsylvania.

The student-run newspaper at Waynesburg University, The Yellow Jacket, recently received two awards from the American Scholastic Press Association (ASPA). They include First Place with Special Merit and Most Outstanding Cover or Front Page.

During the 17-18 academic year, The Yellow Jacket also won nine Mark of Excellence Awards from the Society of Professional Journalists Region 4, which includes Ohio, Michigan, West Virginia and western Pennsylvania. The newspaper’s staff members received the awards in the categories of feature writing, general news, feature photography and sports writing.

In 2017, The Yellow Jacket received eight awards from the Pennsylvania NewsMedia Association (PNA) in the Division II category, for four year colleges and universities with enrollment under 10,000, from work during the 2017 calendar year.

Explore the Department of Communication

Waynesburg University’s Graduate Programs in Counseling have been ranked a top value in Pennsylvania based on data that was provided in part by the Council for Accreditation of Counseling & Related Programs (CACREP) by Top Counseling Schools (TCS).

no. 3 for value in state

Waynesburg's Psychology Progam was recognized as a best value in the 2020 College Factual "Best Colleges Nationwide" rankings, being listed among the top 5% of schools in the nation and ranked No. 3 in the state of Pennsylvania.

Waynesburg University's accounting major was recognized as a 2020 “Best Value for the Money” by College Factual. Waynesburg ranked No. 45 out of 601 schools listed, placing it in the top 10% nationwide, and No. 4 in the state of Pennsylvania for value.

Strategy for the 21st Century